Over the years, Dan has come across many a car with stories to tell.  Luckily he usually has his camera ready, too.  Picture proof that cars of all makes and models have their own classic car stories.  Here are just a few of Dan’s, Big Nose Bus Adventure, Flex Appeal, Bumper Crop of Classic Cars, The Rusty Car and Best Fire Truck awards as well as a trip into history with a 1933 Olds Touring Sedan…

Follow the adventures of the German Swing Band, GI Jive, from Dan’s Garage to Galveston, TX where Big Nose will start it’s solo journey to Germany.  Fingers crossed, it will arrive there sometime in May.  Then the real fun begins.

Check out their website/blog:
www.createandtravel.com

Click on the Bus Project story and follow day by day pictorial of the most amazing story I’ve ever been involved in. Right-click anywhere on the page and choose Translate to English — that makes the story a lot easier to follow.

I sold this 52 GMC bus to the German Swing Band, GI Jive Swing Company and the rest is history. These are the coolest, most fun people I’ve run into in years. When they have an “Adventure” they don’t fool around!  -Dan

Translated from the www.createandtravel.com blog story…

Watch the NBC Right Now KNDU 25 (Kennewick, WA) news article about this Big Nose Adventure back home to Germany on You Tube at:

5/18/2016 — Big Nose has arrived in Germany but still
on the ship, waiting for processing…
http://createandtravel.com/big-nose-und-postkarten-eingetroffen/

The face is familiar but not much left of the truck Dan’s leaning on, maybe the door. (Click on the image to enlarge so you can recognize him, too)

Good times with old cars is a flash from the past with this Chicago Tribune article from March of 2000, “Flex Appeal – Muscle-car Body Builders Pump Iron and Load Carbs At Dan’s Garage,” by Paul Duchene, Special to the Tribune.

Visit a piece of history about Dan, the Tri-Cities, and how it all came to be. Enjoy the entire article at…
Chicago Tribune – Flex Appeal

It’s the kind of a phone call you only dream about if you’re the owner of a muscle car wrecking yard like Dan Stafford. The caller was in Las Vegas, NV. His girlfriend’s father had retired several years back to the family’s apple orchard just outside Wapato in the Yakima Valley. The father had died some months back but when his daughter returned, she found the house in shambles. What she also found, however, were several cars, covered, and in pretty good condition out in the orchard.

“They sent me some murky pictures and were trying to sell the cars with Nevada plates and no paperwork,” said Dan. “They had  ’68 and ’69 Camaros, a ’56 Chevy Bel Air, a ’61 Ford Econoline Pickup and a ’77 Dodge Ramcharger with a 440. I made them a substantial offer – I wasn’t trying to steal the cars, but I told them they’d have to find the paperwork.”  No paperwork, no deal.

With new motivation, the family went through the house again. “I got another call a week later,” said Stafford. “Same voice: ‘You got the money?’ Just like in the movies, even though they had turned everything upside down, a final look at the bottom of a dirty clothes hamper, back in a bedroom closet, was a little safe. Inside that safe was all the paperwork.

This ’64 Impala was sold new at the Chevrolet dealership in Coos Bay, Oregon and spent it’s entire life there under the care of it’s original owner. Coos Bay is right on the ocean and the salt air, fog and mist coupled with the ongoing rainfall create a perfect scenario for rust to devour cars.

The car ended up sitting in a field the last few years of it’s life where the salty coastal moisture really took a toll.  The car was equipped with the 327 V-8 and a 3 speed manual trans, power steering and brakes and a (new for 64) remote control rear view mirror. 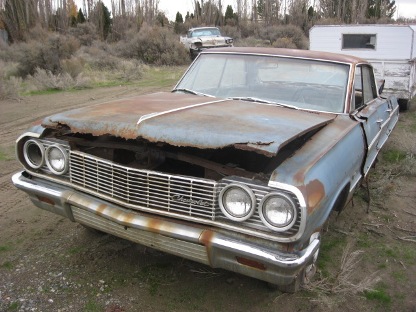 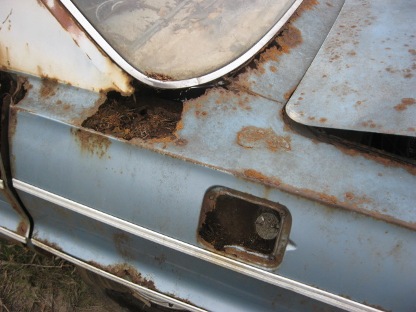 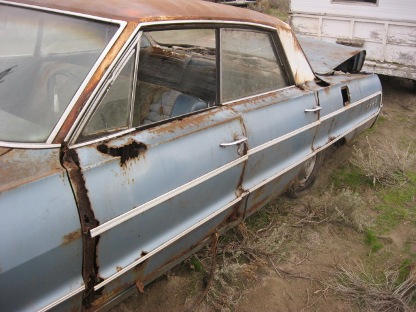 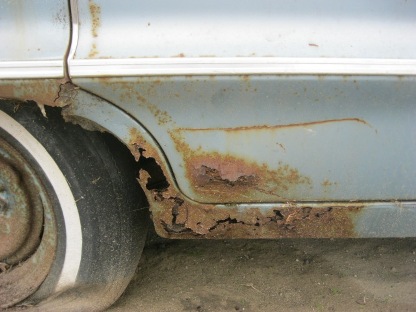 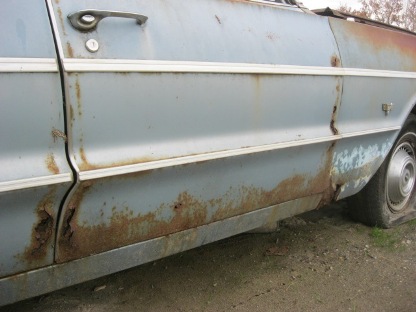 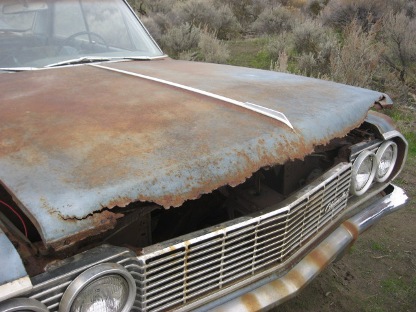 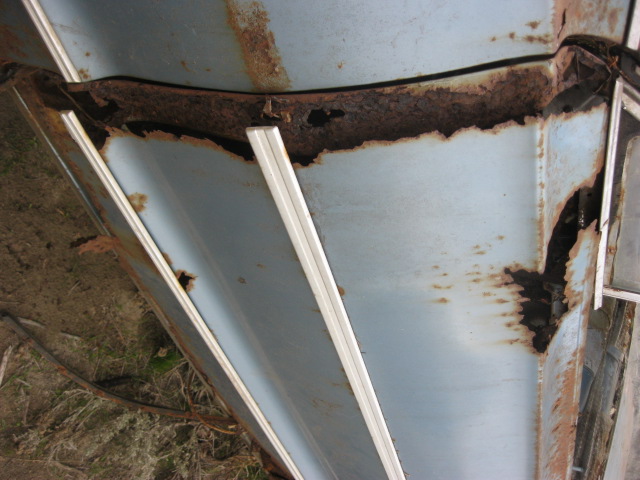 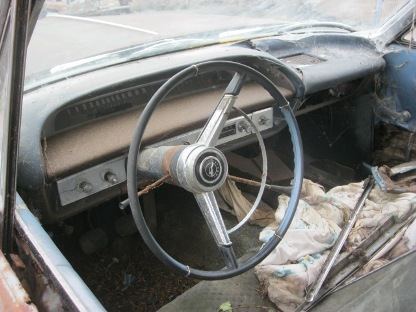 It was so rusty that the drivers door rear view mirror ended up inside the bottom of the door as the sheet metal rusted away and collapsed under the weight of the mirror. The gas filler door and front hood lip moulding were both lying on the ground where they fell after the attaching hardware and body metal rusted away. When I opened the drivers door it fell off on the ground as the door hinges had rusted out of the door pillar. When I got in the front seat one foot went through the floor boards and I could feel the seat springs breaking and collapsing underneath me.

There were very few salvageable parts on this car and I have to say out of all the cars I have junked through the years this one holds the record for rust damage.

In September 2012,  Dan & Kelly visited friends in southern Oregon.  On their way back, they took the scenic route through Shaniko, Grass Valley, and Moro.

Dan had visited Shaniko as a kid and decided to poke around a little… it didn’t take long.  The town was founded in 1903 by a group of wealthy developer/ speculators but never really amounted to anything. Their theory seemed to say, “if you build a fancy hotel they will come”  but not enough people ever came.  The 2011 population is 36. 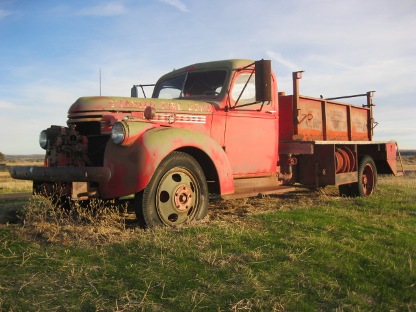 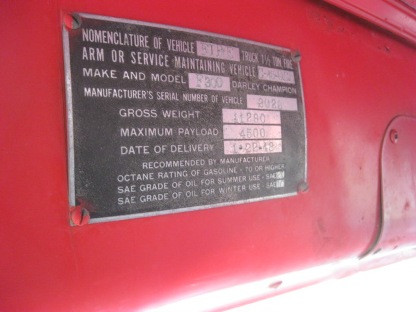 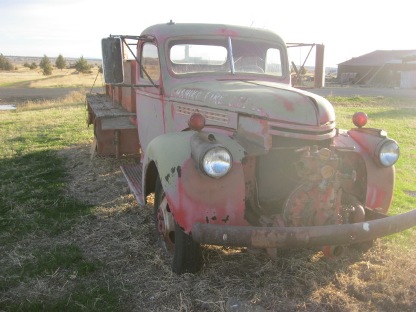 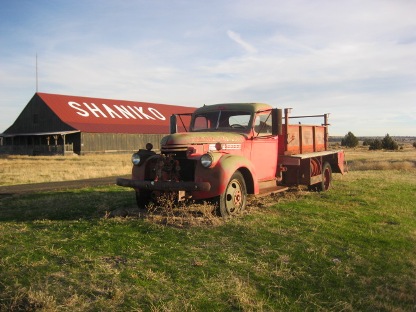 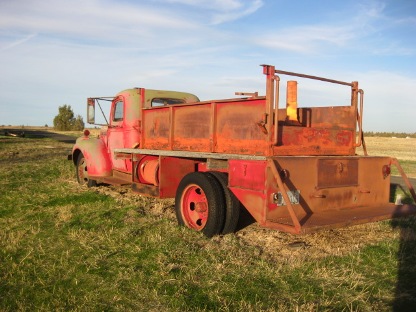 He did, however, find this Original Army issue WWII fire truck mouldering in the weeds.  It probably has 3,000 miles on it.  What a find!  A classic machine, standing guard.

I can remember this car sitting in the weeds on West 7th in Kennewick when I was about 10 years old, riding past it on  my bike.  It was never for sale, couldn’t be bought at any price.  (Yeah, I was just a kid but me and cars go way back.)

Then about 20 years ago it disappeared, seemingly gone forever until around the first part of March, 2013, when it resurfaced in Benton City.

Totally a fluke that I heard about it and knew the car from way back. I love it’s deterioration/patina and have no real plans to mess with it. I prefer to preserve it as a shrine to derelict ultra cool early thirties styling. Look at those 17″ artillery wheels, sidemounts, the hood louvers, and the dust bowl rear bumper and trailer hitch.

I think this is one sexy beast of a car! 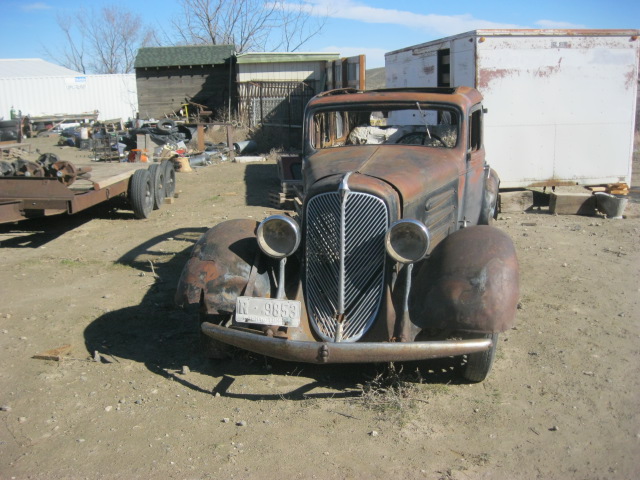 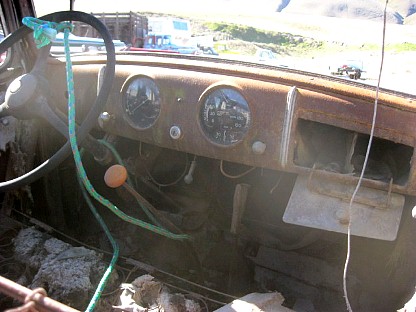 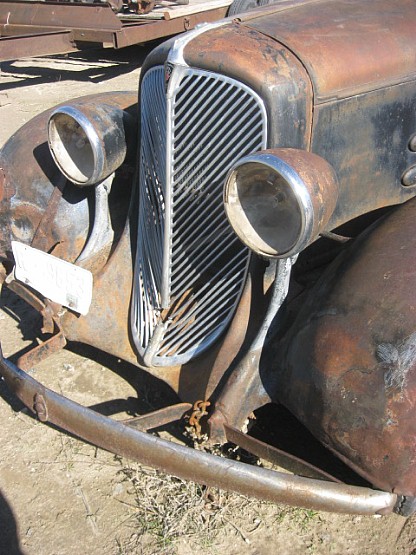 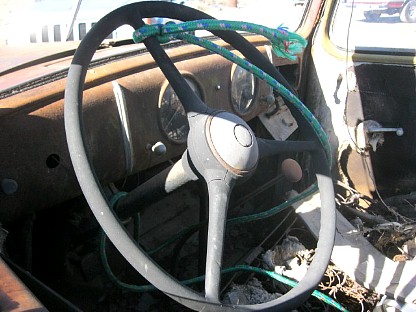 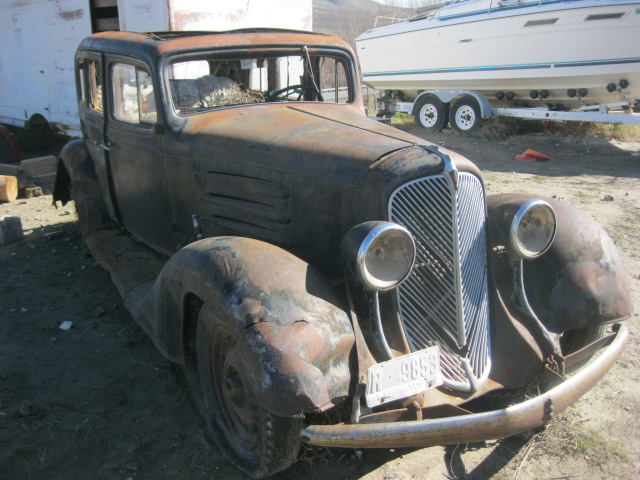 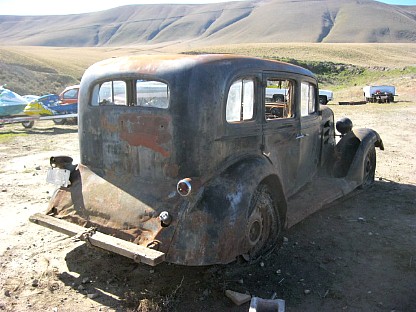